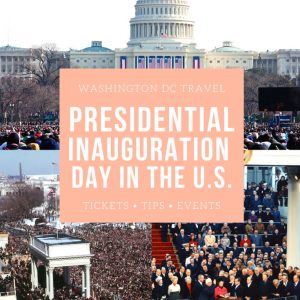 No matter where you stand on politics, we can all agree that the Presidential Inauguration is a grand affair filled with pomp and circumstance. Every four years, the country gathers to swear in the next president. A public swearing-in ceremony on the Capitol grounds is followed by the presidential parade from the Capitol to the White House. At night there is a whole lot of celebrating in the form of sanctioned Presidential balls and unofficial balls.

While the public can attend Inauguration day in a variety of ways, there are several key things you need to know before you book your flight to D.C. or start driving to the Nation’s capital.

2021 Inauguration Day: Official plans for the Presidential Inauguration and inaugural balls have not been confirmed. Please check official websites very carefully to make sure live events are still taking place (and open to the public).

When is Inauguration Day?

Inauguration day happens every four years on January 20th. If the 20th of January is on a Sunday, the date will change to January 21st.

The 59th Presidential Inauguration will be held on Wednesday, January 20th, 2021 in Washington, D.C. on the steps of the U.S. Capital to swear in the 46th President Joe Biden and Vice President Kamala Harris.

Where does the Presidential Inauguration take place?

The Presidential Swearing-In Ceremony takes place on the west front of the United States Capitol and is followed by the Inaugural Address. A luncheon will follow in the Capitol’s Statuary Hall. The president then heads back to the White House at the head of a parade. The evening commences with several balls across the city.

Who can attend the U.S. Presidential Inauguration?

Anyone can attend the Inauguration, but you must secure a free ticket. Security is very tight at the swearing-in ceremony, and tickets will be checked. For those who do not get tickets, you can watch along the National Mall on large video screens placed throughout park.

You can also stand along Pennsylvania Avenue to watch the presidential procession and inaugural parade after the swearing-in.

How to get tickets to the presidential inauguration

You must contact your state senator’s office or state representative’s office in order to get tickets to the inauguration. Most have a form on their website for you to fill out.

Since there are so many requests, sometimes there has to be a lottery per state to assign seats to the public.

Inaugural Events of the Day

Who swears in the new president?

The Oath is administered by the current Chief Justice of the Supreme Court.

What are the oaths of office?

Vice-President-Elect: “I do solemnly swear (or affirm) that I will support and defend the Constitution of the United States against all enemies, foreign and domestic; that I will bear true faith and allegiance to the same; that I take this obligation freely, without any mental reservation or purpose of evasion; and that I will well and faithfully discharge the duties of the office on which I am about to enter: So help me God.”

History of the Inauguration Ceremony

The first Presidential Inauguration took place in New York City when George Washington was sworn into office in 1789.

Many presidents still elect to use the historic George Washington Inaugural Bible for their swearing in ceremony. However, if the weather isn’t good, an alternate Bible will be used to preserve the historical artifact.

In 1901, the 20th Amendment of the United States Constitution set the beginning and ending of the terms of the president and vice president to January 20. It also established that the Joint Congressional Committee on Inaugural Ceremonies (JCCIC) would be been responsible for the planning and execution of the Inaugural Ceremonies of the President-elect and Vice President-elect of the United States at the Capitol.

How to get to the Inauguration

DC Metro to U.S. Capitol: Take the metro to one of the three stations within easy walking distance of the Capitol.

Shuttle Service: While the U.S. Capitol Visitor Center normally provides an on-demand shuttle service for those with mobility issues, you will want to triple check that it is running during the inauguration.

Driving to the U.S. Capitol: You can drive into Washington, D.C. but the closest parking garage to the Capitol will be at Union Station. It will fill up quickly. Do not expect to be able to meter park anywhere close to the U.S. Capitol on Inauguration Day, as many of the streets will be closed off.

Biking to the Inauguration: If you’d rather bike, you can bring your own or grab a Capitol Bikeshare bike, or one of the many scooters around the city. Check the Bikeshare map for locations to pick up and drop off a bike. Scooter drops may be limited due to security measures on January 20th.

This post contains affiliate links. If you make a purchase after clicking one of those links we will receive a small commission.

What to bring to the Inauguration

If it is rainy, you will be allowed to bring a small collapsible umbrella to the ticketed inauguration and along the parade route.

What to wear to the Presidential Inauguration

Since the inauguration takes place in January, you will want to stay warm, but also be able to peel off layers if the crowds are thick and the weather is nice. You will be outside most of the day, so think ahead and layer accordingly.

Security at the Presidential Inauguration

If you received tickets to the Inauguration, you will need to bring your ticket, along with a photo I.D. Double check the list of prohibited items and be prepared to go through a security screening.

You can also buy tickets to the unofficial balls directly from the host organizations.

Where to Stay During the Presidential Inauguration

You will want to book your Presidential Inauguration hotel as soon as possible. Rates will be raised and dates will be booked out. In fact, you may need to go farther away from the U.S. Capitol to secure a room.

Now is an excellent time to cash in your visit with friends who live in Washington, D.C. and the Maryland and Virginia suburbs with DC Metro access. Our couch and guest room are always booked the moment the President-elect is announced.

Hotels Near the U.S. Capital

Every four years in January, visitors flock to Washington to celebrate an incoming president. It’s one of the most exciting times to be in the city, and generally hotels book up soon after the election results are announced.

If you haven’t secured a stay for your upcoming visit to Washington, these are a few hotels in close proximity to the Capitol that are a good bet depending on what you’re looking for. Act fast, because many of these may book out soon if they haven’t already!

Check out other Washington, D.C. Hotels near the Tidal Basin

Check out more Airbnb Washington DC locations across the city

Pin it and Start planning!