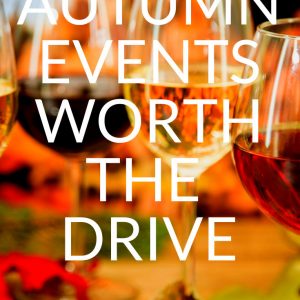 Crisp cool weather, apple picking, and pumpkin spiced anything (and everything) has hit the East Coast. Autumn is here and there are tons of celebratory festivals, art and music shows happening in and around Washington, DC.

Some of our favorite Washington DC events take place a drive away in towns and cities across the Mid-Atlantic states. From Philadelphia and Baltimore to smaller towns like Easton, PA and Winchester, VA there is more than just pumpkin juice brewing this season.

When DC is your main hub, hop in the car and explore these great autumn events across the region.

Who can resist a bacon festival? Not us! Located in Easton, PA, the PA Bacon Fest takes place in early November.

Visitors can enjoy bacon-themed culinary treats, cheer on their favorite pig or pooch in the annual Pig and Wiener Dog Races, and sample beers from the Weyerbacher Brewing Company.

Did you know that Philadelphia is the unofficial mural capital of the U.S.? It’s true! And I’m not just saying that because I grew up in Philly.

The Mural Arts Project started back in the 1980s to combat the rampant graffiti throughout inner-city Philadelphia. By hiring graffiti artists, the city was able to bring local pride into some of the poorest neighborhoods.

Philadelphia has so many murals that they are now in their second and third reinvention of the mural, while other cities are just starting to find their artistic voice.

Mural Art Month focuses on empowering a sense of community and civic voice through art across the city.

Watch artist while they create murals, sit in on panel discussions, participate in workshops and watch as new mural projects are dedicated across the city. Each has a powerful message, and ties back to the city and the community it is placed into in some way.

If you are new to the Philly mural scene, make sure you hop on an Art Walk to get a real taste for the mural history of this city.

Head north from DC to Baltimore for the Maryland Fleet Week and Air Show Baltimore taking place in early October.

Tour more than a dozen ships from the U.S. Navy and Coast Guard, Canadian and British Navy ships. The USAF Thunderbirds and demonstrations from the F-16 Fighting Falcon will be taking place over the weekend, and is definitely something young (and old) aviation enthusiasts won’t want to miss.

In addition to the ships and planes, there are a number of different festivals scheduled throughout Fleet Week.

Two tips: Friday is when the Thunderbirds do their practice runs. The crowds are a lot smaller than the weekend too. Many of the ships are also open to tour. Go on Friday afternoon if you have time and the kids have a half day.

Oh and moms, you can take a selfie with a sailor at happy hour on Friday. Check the schedule for exact times and locations for that one.

Maryland doesn’t just love her OLD BAY® Seasoning and crabs, she loves her oysters too. Get ready to experience the National Shucking Championship with competitors from across the United States.

The winner gets to compete in Galway, Ireland for the World Shucking Championship. Yes, that is a real thing.

For those not participating in the contest, have no fear, there is plenty for you to do. There is live music, local foods, arts, crafts, craft beer tasting, and loads of family fun.

Oh, and did we mention that there is also the National Oyster Cook-Off happening? Do not miss your chance to get inspired to create your own amazing oyster dishes and maybe even enter next year.

Maryland is home to the second largest Renaissance Festival in the country. Enter Revel Grove, a 16th-century English village, where King Henry VIII and his court preside over the festivities.

Roam around the 24-acre site featuring more than 250 performers on ten different stages. The festival is home to 130 craft shops, 42 food and beverage emporiums and a host of games and attractions.

LARPing (Live Action Role Playing/wearing period costumes) is highly encouraged. More than one fairy, goblin and damsel in distress who does not work the festival will be in attendance. I guarantee it.

In fact, if you see two beer wenches, say hi to my friend and her mom who were there last weekend.

Click for more information on Rennaissance Faires before you go!

The 2nd Street Festival, which takes place in Jackson Ward, an area once known as “the Harlem of the South,” celebrates the rich culture of the neighborhood.

The historically African-American community is features four stages of live musical entertainment, food vendors, a marketplace and Artists Row to Shop, and welcomes locals and out of towners to experience why this neighborhood is the place to be in Richmond.

A four-day culinary experience- do you really need more convincing to drive south?

Fire, Flour, and Fork is a series of events taking place around downtown Richmond. Previous years have explored themes like Your Fork, Your Future “exploring the power of the recipe box and the stories recipes tell with families and social/political movements.”

Sign up for dinners, tours, demonstrations and booking signings. Do it quickly and stalk the website. Tickets can be purchased online and they sell out fast.

The Annual Richmond Folk Festival takes place on Brown’s Island (although the location can change from year to year) with performing groups on seven different stages and all the dancing, crafts, food, and beer you could want.

Themes change every year, but the 2018 favorite was “Masquerade.” Visitors could explore costuming traditions from across the globe, including Buddhist ceremonial masks and Carnival costumes.

Did someone say beer?! The Annual Oktoberfest happens throughout Old Town Winchester in mid-October.

Entertainment is free to everyone, kids included, and beer and wine tastings can be purchased via advance or day-of tickets (tickets get you six tastings and a souvenir beer stein).

Local and imported beer and wine are served, as well as several German edibles you and your kids will love.

Past bands and entertainment have included Alt Washingtonian Schuhplattler Verein the “Original Bavarian Dance Club of Washington DC with over 30 dancers dressed in authentic German costume.

The Winchester Frontier Days began as a tribute to Buffalo Bill and the 100th anniversary of his visit to Winchester in 1916. What better way to celebrate than with shootouts, roping demonstrations, artisans, crafters, and a nice lunch?

Admissions are $5 a person, $20 a family, and children three and under are free. Not too bad for a weekend excursion.

Taking place in Merchant Square, in the heart of Colonial Williamsburg, the Art and Music festival is free and open to all.

Artists from all over the country gather in Williamsburg, VA to showcase their work while consumers enjoy the local food vendors, watch live performances, and do a little early holiday shopping.

Snack on food from local food trucks and craft beer while you listen to live music.

For more than 50 years, families have been flocking to the annual National Apple Harvest Festival to enjoy delicious food, live music and tons of craft vendors.

We love it because we can load up on our favorite hard cider made right in Gettysburg, PA. You can also check out antique cars, steam engine displays, orchard tours, a petting zoo, and an appearance by the Pennsylvania Apple Queen!

Tickets are available online or at the door. Just don’t forget to take home a bushel of apples. Your kids will never forgive you if you don’t.

Did you know that Gettysburg, PA (in Adams County) is the fifth largest apple producer in the country? They also make wine and brew beer too.

You can now go on your very own Pour Tour with the Adams County Pour Tour passport booklet that helps you visit all of the wineries, breweries, cideries and even a distillery or two across the county.

What better excuse to get out and explore one of Central PA’s most popular historical destinations, even if you don’t feel like sitting on a cannon.